Tea Leaves and Coffee Bushes: the history of your morning cuppa’

It seems a simple choice: tea or coffee for that morning pick-me-up. But then there’s the matter of Earl Grey or Breakfast tea, herbal tea or macha latte, a cappuccino or flat white, skinny, full-fat, soya or almond milk. Far more complex and intriguing, though, than these 21st-century dilemmas are the stories of how those beverages made their way to our kitchen tables in the first place.

Tea is a native of China and was drunk there in the far distant past, though the story that the legendary emperor Shennong discovered it in 2727 BC after the wind blew leaves from a tea bush he happened to be sitting under into a pot of boiling water is likely to be a tall tale. By the early 9th century AD, when Lu Yu wrote the Manual of Tea, though, its preparation and drinking had become an art-form, with instructions for precisely the best time to pick the leave and exhaustive tips on how to infuse them (replacing the earlier habit of crushing the tea into cakes and then grating it like cheese into boiling water). For a long time, tea was a bitter beverage, drunk without sugar or milk, and favoured in Buddhist monasteries as a means of keeping the monks awake during prolonged bouts of meditation. Milk only became popular from the 17th century during the Qing dynasty, whose central Asian nomadic roots included a heritage of drinking dairy products previously alien in China. Although tea had certainly reached London by the 1650s (where it was referred to as “Tcha”), it took sugar to transform it into a drink popular among the sweet-craving British and the acquisition of colonies in the Caribbean, beginning with Jamaica in 1655, where plantations operated by enslaved labour produced the magic sweetening catalyst in massive quantities. By the mid-19th century tea had completed its transformation from medicinal Chinese drink quintessentially English beverage.

It took coffee somewhat longer to establish itself on British breakfast tables, although the legend of its origin is equally as picturesque as that of tea. A 9th-century Ethiopian goatherd is said to have observed his goats becoming rather excitable when they chewed on a particular berry and – for reasons somewhat obscure – decided to drop a handful into boiling water, creating the first cup of coffee. Long associated with gossip and scandal – it was banned by the governor of Mecca in 1511 as it encouraged gatherings of dissenters with radical ideas – it reached England by the 1650s, rapidly spawning thousands of coffeehouses (including the forerunner of Lloyd’s insurance market). In 1672, exasperation at the amount of time men were spending in such establishments led to the Women’s Petition Against Coffee which alleged that they were abandoning their wives to spend their days drinking this “little base, black, thick, nasty stinking nauseous puddle”.

Despite this opposition, coffee caught on, especially once its spread from its native habitat in Ethiopia and Yemen and cultivation began in the Caribbean and South America. The epicentre of the industry became Brazil, to where, one story has it, the first plant was carried in 1727 by Francisco de Mela Palheta who used his charms to seduce the wife of the governor of French Guiana, where it was already cultivated, and brought back her gift of a bouquet including coffee seeds. From such picaresque beginning an industry grew which today produces 3.6 million tons of coffee beans a year and is worth more than $1 billion annually to Brazil.

It is stories such as these which made researching History of World Trade in Maps such a pleasure. With a huge canvas, from the bartering for obsidian in the Neolithic Aegean to the information miners of the 21st century, the story of trade is a massive one, but, in the rush of battle and the hurly-burly of politics, it is often overlooked. I hope that this new book will help correct that balance, as well as give readers the opportunity to enjoy the more than 70 beautiful maps that accompany it. 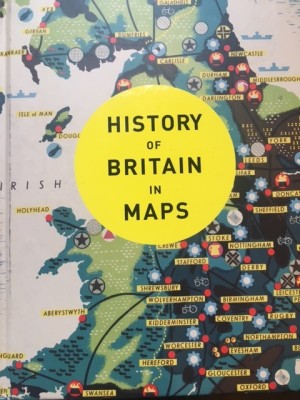